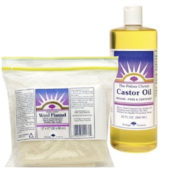 Castor Oil Packs- How to Make & Use Them

The process involves resting a castor oil soaked cloth on the skin for at least an hour under a heat source to stimulate lymph and liver function. Unlike some “detox” methods, this is not believed to have any negative side effects and the there are many accounts of people who noticed immediate better sleep, more energy and clearing of skin symptoms.

There aren’t any conclusive studies on the use of castor oil packs externally but a long history of traditional use in many cultures. Castor oil packs also provide time of quiet relaxation, which also has health benefits.

Even for external use, it is advised to consult with your health care practitioner prior to use.  It should not be used if pregnant or struggling with a medical condition. I also test any new oil (or any substance) on a small part of my arm before using on a larger area of the body. Internal use of castor oil can be highly toxic.

How to Use a Castor Oil Pack

Castor oil packs are simple to use at home and I like them because they require me to be still and relax and read a book for at least an hour. They can be messy, but with proper preparation are not.

The easiest and least messy option I’ve found is the Complete Castor Oil Kit from Radiant Life. It has the castor oil, cotton flannel and a non-messy wrap around pack that removes the need for plastic wrap and has kept mine from leaking at all.

How to Do A Castor Oil Pack

I highly recommend carefully prepping the area where you’ll be doing the castor oil pack to prevent mess. I suggest using an old shower curtain as a tarp, covered with a sheet under me, just to make sure nothing stains. I don’t wash the sheet often, and I fold and store in the bathroom cabinet for the next use.

Want to join the discussion?
Feel free to contribute!